Hasbro’s Nerf Rival range was a game-changer for the age group of 14 years and above. Up until the launch of the Rival range in 2015, Nerf was unofficially designated as a toy brand for kids between 8 to 12 years.

But with the arrival of the high powered Nerf Rival guns, the scenario changed once and for all. These blasters use high-impact rounds instead of typical Nerf darts and known for their accuracy and precision. Interestingly, each of these Nerf guns is named after Greek gods.

There is no denying the fact that the Rival gun range is one of the best product lines of Nerf. But with so many options of high-powered blasters, choosing one for yourself can be a tad difficult.

If you feel that a cloud of confusion isn’t letting you decide, always remember the two following points:

I am a Nerf fan myself and possess over two dozen blasters in my collection. If you are looking for the best Nerf Rival gun right now, hurray! You are in the right place. I have prepared a list of the eight best Nerf blasters and also provide a Buying Guide after testing them and comparing the guns against several others. Take a look: 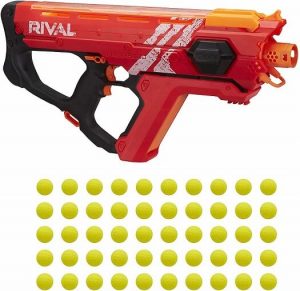 The Nerf Perses Mxix-5000 is one of the latest Nerf rival guns that came out in 2019. It has an impeccable rate of firing, which is eight shots per second! In my opinion, it is the best Nerf Rival blaster with which you will be able to obliterate your rivals in no time. The hopper has a capacity of holding fifty rounds, which is okay, but certainly not the best in the Rival range.

There is a safety switch on either side for both the lefties and righties to use it with ease. For loading, you can just pull the hopper door, dump the rounds, and put it back on. Easy-peasy!  The blaster uses a belt-driven feed system, which is similar to the Prometheus and the Nemesis guns, but the Perses Rival gun is way faster. 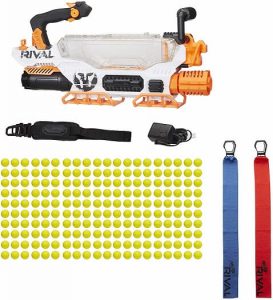 The fully automatic, flywheel powered Prometheus MXVIII-20K has a 200 round capacity. So, if the hopper capacity of the Perses did not appeal to you, then you can go for this model.

In terms of looks, this Nerf Rival gun looks straight out of a sci-fi movie. It has a detachable carry handle, two feet, team indicators, and shoulder straps to supplement the ergonomics of the gun.

Despite the massive 200 round capacity, I think it to be the second-best Nerf Rival Gun because of two reasons. First, it is more expensive than the Perses blaster; and second, the rechargeable battery has to be fixed with a screw every time you remove it.

But if you want to be the last man standing in a Nerf war, then the extra money and the effort is well worth it.

The Nemesis MXVII-10K was the best and the most popular Nerf gun in the Rival range before the launch of the Prometheus and Perses blasters. It is a fully motorized gun that can give a formidable challenge to your opponents.

The mag is super easy to load. It has a hundred rounds hopper capacity and can fire at a speed of 100 feet per second. There are sling mounts on both sides.

In terms of rating, the Nemesis stands third. Its rear sight is pretty wide, which is of little help when you want to aim and shoot. Also, unlike the previous two Rival guns, it does not have a rechargeable battery, which means recurring expenditure to keep the gun functional.

Get hold of the Nemesis MXVII-10K, set your target, rev the blaster for a moment, and off you go for the ultimate Nerf showdown!

You might be thinking, why am I literally reviewing the same product twice? Well, the main reason is, the previous Rival Nerf gun was in blue, and this particular blaster is Red.

The Nemesis MXVII-10K is an immensely popular Rival gun, and if you are a Nerf fan, you’d know that the color of your Nerf gun makes a difference!

While the blue and orange color looked super cool, this red blaster with orange parts looks like a mixture of a heterogeneous blend of dissimilar things (Sorry lovers of Red!). I have liked many Nerf blasters in the color Red, but this particular Nemesis model isn’t my favorite.

Nonetheless, its features, aesthetics, accuracy, and ergonomics make it one of the best Nerf Rival Guns of all time! 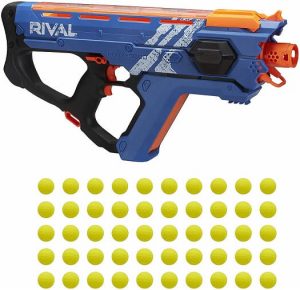 The Perses Mxix-500 is the fifth-best Nerf Rival gun on this list. I have reviewed the Red model of this same gun higher up in this list.

In terms of features, it is the same as its Red variant. This gun has an immense capacity to shoot eight projectiles with a velocity of 100 feet per second. The Hooper of this Nerf gun can house about fifty high impact rounds. The Perses is a fully automated blaster that runs on a rechargeable battery.

If you are a lover of Blue color, then let this rating not dissuade you from buying the blue variant. It is a fantastic Nerf Rival blaster that will most certainly fetch you victory in Nerf wars. 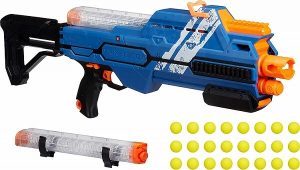 Searching for the best Nerf Rival gun that is operated manually? The Hypnos XIX-1200 is your go-to blaster. It is surprisingly lightweight for a Rival gun and gives you the best bang for your buck.

I will palace this blaster as sixth-best Nerf Rival gun as it is not entirely an ambidextrous model, to begin with. The Hypnos XIX-1200has a mag capacity of only 12 rounds. And most importantly, it is not a slam fire gun.

The Hypnos XIX-1200 also comes with two magazines that can be of enormous advantage in the Nerf gameplays.

The next time you are out of ammo on the battlefield, you don’t have to amass rounds from the ground while your opponent strikes you dead. With the Hypnos in your grip, you can flip out the extra mag, snap it and fire at 100 FPS! 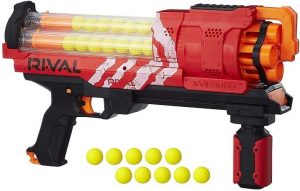 The Nerf Artemis XVII-3000, too, is a pump-action blaster that is operated manually.

It has an integrated magazine consisting of three round mag that rotates each time you shoot, extra style points for that! However, you will have to shell out twice the price of Hypnos XIX-1200 to get this Rival gun.

Each of the magazines can hold ten rounds, which gives it a capacity of thirty shots. It isn’t a large Nerf gun per se, but the grip is larger than many of the blasters I have seen. Which, by the way, is a good thing.

I am listing it in the seventh position as the magazines are permanently integrated into the gun. I am not sure why someone would want to remove them anyway, but it is always good to have options. Right folks? 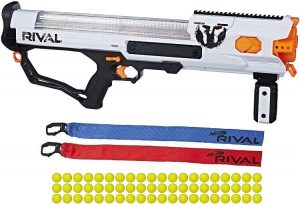 The Phantom Corpse Hades XVIII has a similar mechanism to the Artemis. This Nerf Rival blaster, too, has an integrated magazine consisting of three round mags. However, it is perhaps an extended version of the previous product on this list. It has a round capacity of sixty propellant instead of thirty.

I would give extra style points to this Nerf blaster for the rotating barrel and sleek body. With this Rival gun, you can prime and shoot one round at a time or bring your opponents down by resorting to the slam-firing mode.

The Rival Phantom Corps Hades XVIII is the eighth-best and ranks below the Artemis Nerf Rival gun because it is slightly larger than the former, which means that you are likely to have a little more difficulty managing it. The trigger space is a little too small in my view, but if you have thinner fingers, you should have no problem spewing foams at a good speed.

Things to Consider While Purchasing the Best Nerf Rival Gun

If you are a nerf fan, you would know that buying a Nerf gun is no easy business. Often it happens with buyers that they get a very positive feeling about a blaster, but the moment they unbox it, disillusionment follows.

To shield you from disappointments, I have come up with a short buying guide to help you out. This guide will tell you the factors you need to consider before you spend your money on a Nerf Rival gun.

1. Velocity of the Propellant (FPS)

The rival range of nerf is designed for competitive play. They come with a few attachments and are best for charging your opponent and cover firing for teammates. Hence, FPS plays a very crucial role in deciding the merit of a Nerf Rival gun.

The higher the FPS, the better is the gun. I suggest you purchase a rival gun with a velocity of at least 90 FPS.

Always look for slam fire while purchasing a Nerf gun, primarily if it is manually powered.  It lets you shoot multiple shots without having to cock the blaster over and again. It is a handy feature that enables you to get the upper hand in Nerf wars.

Rival guns are best suited for Nerf showdowns. And in a deciding contest, you will certainly not want to run out of ammo after the first few seconds. Hence a gun with at least 30 mag capacity is the best. Also, you can go for several rounds without having to refill a Nerf gun that has a mag of very high capacity.

The look of your blaster is supremely important. So, choose a model that is visually appealing to you. However, that is not all. An appealing gun with poor features is likely to lead you out of the battle zone sooner than you realize. So, make sure that it has all the needed features and is comfortable to use.

Look for an excellent gripping handle, well-defined stock, and a spacious trigger hole. Also, if the Rival gun is manually operated, you must make sure that the priming process is smooth. It is also essential that your blaster does jam while loading or shooting.

5. Color of the Nerf Rival Gun

The Nerf guns come in three colors- red, blue, and white. While the former two denotes the color of the team, the latter is more versatile.

If you want to buy a Nerf gun in red or blue, choose the color of blaster according to the team in which you play. Alternatively, if you have many guns of the same shade, you can buy one Rival gun from the other color variant for keeping an option.

But, if you are new to Nerf, we suggest you buy a while Rival blaster. These guns come with color flags and do not require you to buy a different gun if you think of switching teams. Also, if you are playing games like Zombie, then the White blasters can be of immense help if you are a first-time buyer. Otherwise, you might have to invest in two guns for such games.

Choosing a Nerf Rival gun isn’t as easy as selecting an N-strike Blaster or a Mega Blaster. And if you are not entirely decided yet, I understand.

In my opinion, the NERF Perses MXIX-5000 is the best, owing to its strike rate, ergonomics, and cost-effectiveness. However, Mag capacity isn’t this Rival gun’s forte. If you are looking for a blaster with a huge hopper capacity and superb performance, then you can buy the Nerf Rival Prometheus MXVIII-20K.

In case of queries, comment below to let us know. We shall reply to you as soon as we can. And also, if you own any of these blasters comment below describing your experience with it.