The most bizarre-looking Nerf Guns that you see on TV, YouTube, social platforms are not everybody’s cup of tea. They are freaking expensive, and you really need to master the art of Nerf fights.

That dent means Nerf guns are not intended for your use. You can still get some of the best Nerf guns under 30 dollars or less. And if it’s for a kid or a teenager, there no need to spend any extra dollars on a Nerf Gun.

They can also come with good shooting range, ammo capacity, slam-fire mechanism, and customization options. The choices are too many, and when your budget is constrained, it’s easy to get overwhelmed.

So to make the choice easier, we have listed some of the best Nerf Guns that you can find less than 30 dollars. The section of products has been done by considering quality, performance, ease of use, and customer feedback.

In case you are in a hurry, here is a shortlist of things you need to consider while buying a Nerf Gun.

If you want detailed information on how to buy the best Nerf Gun under 30 dollars, read our Buying Guide at the end of this article. 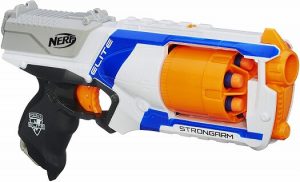 If you are looking for the best Nerf gun under 30$, you will find it challenging to find a better option than this. Elite Strongarm is an Amazon exclusive product with mind blogging customer reviews.

It’s a pistol style fully motorized gun that is super lightweight, around 1 pound. It can hold up to 6 darts and shoots them at a 90 feet distance. The best part is barrel almost entirely flips-out. This is a much faster and easier way of reloading when you are under attack.

Slam-fire makes it possible to launch 6 darts all at once. It’s a good-looking toy with a comfortable handgrip. Though it’s lightweight, the slam-fire makes it quite hard to operate for younger kids. It’s best for children above 8 years, teenagers, even adults. 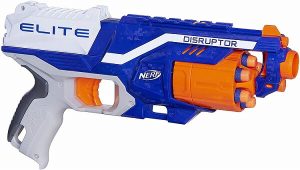 N-Strike Elite Disruptor is probably the cheapest best Nerf Gun ever made. It’s like a re-bodied Elite Strongarm but without the flip-open barrel; instead, it uses a front loading mechanism.

The only thing that comes on the way is the spring fire mechanism. You have to entirely pull back the side to avoid jamming and misfiring, which makes it a bit complicated to use for the younger kids.

Yet another inclusion from the Hasbro Elite Series, the Retaliators, was designed for wars. Unlike the other two, it can be customized in 4 different ways. On top of that, it comes with 12 darts that shoot up to 90 feet.

There is a barrel extension used for long-distance firing and a detachable stock for a steady shot. We love how easy the configurations are.

The top and bottom tactical rails are compatible with almost all N-strike accessories. It comes with 12 dart magazines, but you can fit an 18 dart if you like.

The only complaint we have is that it doesn’t have a slam-fire mechanism making it a bit slower than others. 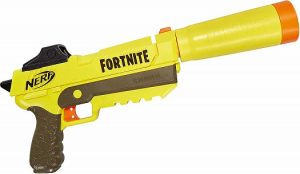 Not many people know about SP-L, but it is a masterpiece in a small package. Kids of 5 to 10 years old have no issues using it; it is that effortless and lightweight.

It features a 3 dart internal magazine, detachable barrel, and can blast at a speed of 66 feet/ second. It seems like an average model, but the accuracy is surprisingly good.

Also, the internal barrel makes is super easy to reload. And there are hardly and jam issues reported by the users. It has a goofy look and weighs less than a pound.

Ideally, the flagship Nerf Fortnite gun is an AR-L blaster, but the SP-L is still the deal-breaker for the price. Fortnite fans who are tight in budget, it is your blaster!

If you are a true Fortnite fan, you have wanted and waited for this to enter the real world. It’s not an actual gun, or rather, it is a missile launcher.

It comes with two rockets that you can launch in three easy steps- load, prime and start the bombardment. The size of the gun is enough to scare away the enemies. However, it weighs 2.2 pounds means handling this is not a kid’s job!

The aesthetics, quality, and price are on point. The only issue that remains is the limited source of rockets-only 2.  This means you have to buy them separately to be in the game. Else, your chances of getting blasted before the winning are high. To shot the zombies dead by one single shot, you need something like this Nerf Zombie Strike blaster. It is considered one of the highest quality Nerf guns for its accuracy and solid build quality.

The Hammershot blaster holds 5 zombie strike darts. And features one-hand blasting, which makes it an ideal choice for dual-wielding or multitasking.

The hammer action doesn’t require much strength like a pull-back or slam-fire action. So, even kids can use it without frustration. The range is estimated at around 66 feet, which is satisfactory for the quality and precision it provides.

It’s better to use zombie strike darts, but it is also compatible with elite darts and standard orange darts. 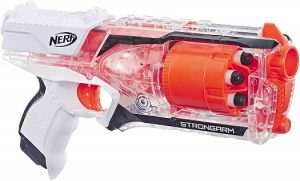 Amazon’s exclusive Strongarm is one of the best sold Nerf Guns ever. And here is another modification of the item.

Technically there is no difference other than exciting colors. It comes in three attractive color combinations- Clear/Orange, Orange/Blue, Orange/Purple making it a huge attraction among younger kids.

It has a flip-open rotating barrel like the original Strongarm. The functions are almost like a pistol, but keeping small children in mind, it has kept loading and reloading simple.

The best part is that it supports slam-firing or rapid firing for the ultimate battle between good and evil. Overall, it can make an excellent gift for newbies and Nerf fans. 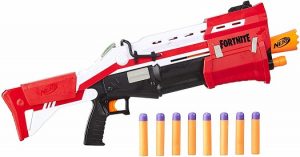 Fortnite TS-1 is not for the faint-hearted. It’s expensive, and it’s made for serious fighting. The TS-1 blaster comes with 8 mega darts that shoot up to 90 feet if shot with full power.

Unlike any other on this list, the stock can store 4 darts. That means a chance to end your enemies when they least expect it.

It shoots hard and fast. And it does it with precision. Despite being a premium Fortnite gun, it works by pump-mechanism, so no worry about running out of battery.

It gets full marks for the mighty look it has.  However, loading the darts takes some time, so you have to practice a bit to master it. 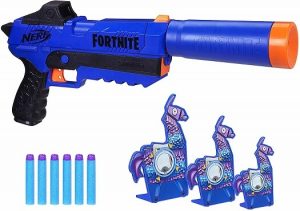 The Fortnite Sp-R comes with 3 llama targets of different sizes. So, how about practicing your aim before you actually take part in a game?

Three different size targets help to achieve more accuracy. Without any doubt, the color and design are impressive. It can make you feel like a warrior from Fortnite. Also, there is a front rail to attach accessories, if you like,

The gun has internal barrels that can hold 3 darts, which is a bit disappointing for adult fighting. There is hardly one or two jamming issues reported, which is quite common in all affordable Nerf guns under 30$. Otherwise, it’s a fighter with fantastic customer feedback.

Things to consider when buying the best Nerf Gun under 30$

The Nerf Guns under 30$ are mostly manual because they are cheaper to make. Though they lack most of the advanced features that you see on TV in Nerf battles, they are still great toys for newbies. They are easy to operate, lightweight, and thus, anyone of any age can use it. And perhaps some of us are really not into paying for severe fighting.

You can’t expect a 30 dollar gun to hold a lot of bullets. Also, it doesn’t necessarily mean you shouldn’t look for one.

Higher ammo capacity is always an advantage. Look for a Nerf Gun that can hold 6 darts on an average. It’s a middle point and a decent capacity for an affordable Nerf gun.

If your gun holds lesser bullets, don’t assume that it won’t work or it’s poorly made. It simply means it comes with a disadvantage of frequent reloading. You could fire, but in this case, you have to learn how to reload quickly.

A Nerf Gun must be able to shoot from a long distance. Don’t’ choose something that shoots only 5 feet as the manufacturer advertises shooting range up to 90 feet.

It should cover a minimum distance of 50 feet to play both inside and outside games. Anything less than this and it can call be a total waste of money and time.

Each Nerf Gun has a different mechanism of priming, cocking, and loading. Some guns can fire continuously while some fire one dart at a time.

Also, some guns have a slam-fire mechanism, while some have a pump and or hammer mechanism. These might be a little confusing mechanical term. Just remember a slam fire requires more strength to pull compared to the pump and hammer mechanism.

Take a look at the darts and what guns they fit to. You might not be aware that certain guns support a particular type of dart. Like the Nerf Elite series, only accommodate elite darts.

There is also a color scheme. Like Elite darts are generally blue and some orange standard elite darts. There are also Zombie strike darts, mega darts, and rockets.

Darts generally come with the gun, but in case you need to purchase more, carefully choose the accurate dart supported by your Nerf Gun.

Adding accessories like additional ammo storage, scopes, bipod, and flashlights will give you an edge over other competitors.

If you want to invest in your Nerf gun in the future, it might be an excellent feature to have. The best part is that you can buy accessories separately. That means you can buy an affordable Nerf gun now and accessorize it when you are ready to take part in actual fighting.

Not all affordable Nerf guns come with rails for adding attachments. But some models like the Elite Strongarm, Elite Disruptor, Elite Retaliator have the option to accessorize.

Age of the User:

A complicated, more advanced gun is made for those who can handle the power. They are usually heavier. Having said that, you should consider the weight and size of the firearm you are purchasing. Often, the age limit is mentioned on the box.

The darts that shoot out of a Nerf gun can hurt a person if aimed at sensitive spots. Teach your kids not to ever aim at someone’s eye. Make sure your kid can handle it without shaking. The gun may consist of small parts, so never ever hand them to younger kids. It can cause a deadly choking hazard.

So did you decide which gun to go for? If you have read the whole article, we believe it was easy for you to decide. However, like we always do, here are two choices for you in case you are still not sure about your next purchase.

Nerf N Strike Elite Strongarm– It’s a classic Elite series gun. It has 6 dart capacities, 90 feet shooting range, slam-fire mechanism, and the option to add accessories. It has terrific customer feedback from all over the world. In simple terms, it almost impossible to find out a better choice than this under 30 dollars.

Nerf N-Strike Elite Disruptor– Elite Disruptor is the best budget Nerf gun. It shares similar features with Elite Strongarm like 6 dart capacities, 90 feet range, and slam-fire mechanism. It has excellent accuracy. But it’s a bit difficult for younger kids to pull back the slider.

If you have any queries left, comment down below. We will get back to you ASAP!

Also, if you own any of these guns, you are all welcome to share your best and worst experience. We might review what you want us to review in the next article!