The Lego Batman series started in 2006 with the Lego superhero collection. It was an instant hit among Batfans who could not wait to put the bricks together to make their own collection of heroes and villains from the DC universe.

Those of us who have watched Batman have a special place dedicated to the character. It is not just you or us, but an extensive section of mass consisting of millions globally. And each of us who loves both Batman and Lego wants the best Lego Batman set as it combines best of both worlds.

The Lego Batman product line has a good number of products. And in such a scenario, choosing any particular set can be a bit of a challenge.

To get the best Lego Batman set, keep in mind two factors while scrolling through products.

We have come up with the ten best Lego Batman sets of all time after researching, testing, and analyzing dozens of products. You can take a look at our Buying Guide to find the Lego Batman set that suits you the most. 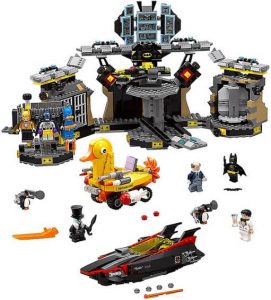 Kids can recreate Batman’s enormous and somewhat mysterious subterranean location of Batcave, where all his secret weapons and gadgets are stored. The Batcave has intricate detailing to render an enriching experience to the builder.

Take the conflict up a notch by constructing the Batboat, and Batcomputer rotating center to let Bruce Wayne transform himself into the formidable Batman.

Minifigures that come with this set include—Batman, Bruce Wayne, the Penguin, and Alfred Pennyworth. You can position these minifigs anywhere on this extensive toy Batcave terrain to set up an elaborate theme of imaginative play.

Additionally, it also features three special Batsuits and two hench-Penguin figures and is the Best Lego Batman sets, in our opinion. 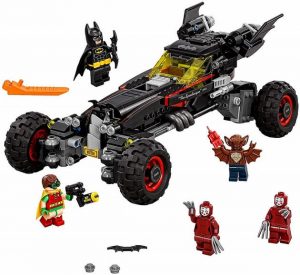 In the domain of all superhero gadgets, there is hardly anything as iconic as the Batmobile. It is an 11-inch long piece of a superb toy car that you can construct using this Lego Batman set.

This Batmobile Lego Set is a suitable toy for all kids who are above the age of 8 and below 14. It is the second-best LegoBatman set for us because of its design, build-quality, and collection of minifigs it packs.

The wheels of the Batmobile are multidirectional and have three different modes—parallel parking mode, race mode, and Monster truck mode. The tires of it are a semi-accurate replica of the ones shown in the movie. They are thick, sturdy, strong, and upgrade the look of the automobile in a significant manner. 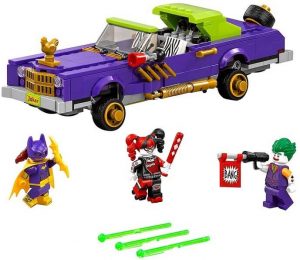 If you think that the Joker’s philosophy always made more sense than the bravado of Batman, then you are going to love the Notorious Lowrider to bits!

It is a replica of Joker’s whacky custom car in the striking purple color that featured in the Lego Batman movie. The Lowrider features a bouncing suspension system and a pair of spring-loaded shooters hidden in the rear. There is also an additional space to fit in Harley Quinn figurine.

You will get three minifigs in this set, that includes Batgirl, Harley Quinn, and Joker himself.

Apart from all the essential features, elements, and functions, this set includes a few other accessories as well, like Quinn’s skates and Batgirl’s cape, which is why we think this one to be the third-best Lego Batman set in the market. 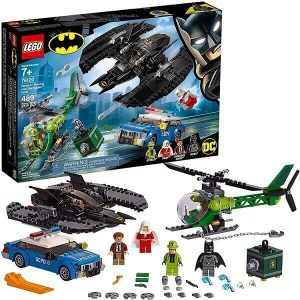 Kids can create the Riddler’s Heist from the movie Batman: Assault on Arkham by using all the 489 pieces of this Lego Batman set. They can engage in imaginative play of chasing the Riddler down the Gotham city with all the forces of Gotham to fight against evil.

The minifigs included in this set are Commissioner Gordon, Batman, Shazam, and Riddler.

It is one of the best Lego superhero sets of all times because it replicates one of the favorite scenes and incorporates all the elements (figurines, gadgets, and accessories) necessary to do so.

5. LEGO DC BatmanBatmobile,Pursuit of The Joker 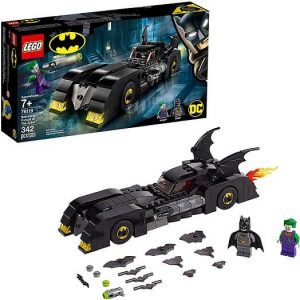 Fans held their breath throughout when Batman chased the Joker on his Batmobile in The Dark Knight Rises. If you are a fan of the scene or the movie, like most of us, then you can get this splendid piece of Lego toy that assembles into the Batmobile.

The supercar features foldout stud shooters, openable mini-cockpit to accommodate the Batmanminifig, and spinning exhaust flame. Kids will surely be mesmerized by the elegance of this car.

It one of the best Lego Batman sets, consisting of 342 pieces and is suitable for all who are above the age of seven years. There are two minifigs (Joker and Batman) incorporated in the package to breathe life into it. 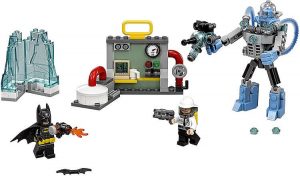 If you have a love for collecting all the supervillains who have terrorized Gotham city, then this set is a must-buy for you.

It is one of the best Lego Batman sets for all kids who want the deadliest of villains in their collection. The Lego game consists of 201 pieces and is pretty simple to put together. You can build the Exosuit of Mr. Freeze and the powerplant using the pieces.

The powerplant has an adjustable lever, a silo with pipe, and a translucent freezing element. You can mount a Minifigure on the Exosuit, which is also equipped with an ice studshooting freeze gun. 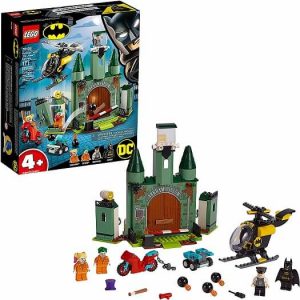 In this set, kids can replay the scene of Batman’s quest for the most villainous duo of Gotham. With this Batman set, you get to build the Arkham Asylum, Quinn’s bike, and the Batcopter.

Harley Quinn’s bike has a chain element that can bring the Arkham’s walls down and help Joker to escape. There is also a watchtower with space for mounting the prison guard figurine. Other accessories in this set include Penguin’s hat, a mobile catapult, and two prison wings. 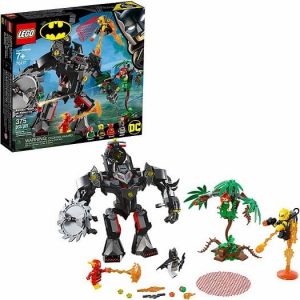 Build the Batman mech and mount the minifig to Battle the Poison Ivy mech. We think it to be one of the best Batman sets because both the Mechs have several features to awe the little builders.

The power burst elements and Bat elements give you some creative freedom to design the storyline according to your wish. Overall, it is a power-packed Lego set that brings on to your table epic Battles between superheroes and supervillains from the DC universe. 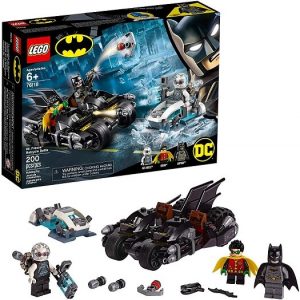 The Batcycle is a super cool gadget of Batman that has rooms for seating two minifigs. It can split into two to accommodate Batman and Robin when it is time to divide and combat. Because of this unique feature of the Batcycle, this product features as one of the best Lego Batman sets of all time.

With this Lego superhero set, you can build the Batcycle of Batman and the Snowscooter of Mr. Freeze. Kids can imagine elaborate combat scenes from the DC universe to make effective use of these toys.

It is suitable for kids who are six years and above and contains 200 pieces. The minifigs included in this Lego set are Batman, Robin, and Mr. Freeze. 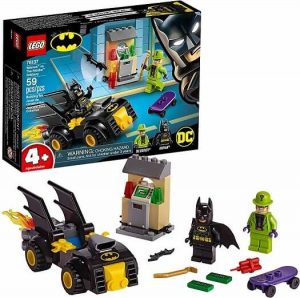 The set consisting of just 59 pieces is the best Lego Batman set for beginners. Kids who are as little as four years old can put this Lego set together without any hassle.

Children can build an ATM and the Batmobile using this set. It contains two minifigs, that of the Batman and the Riddler. Other accessories include a buildable skateboard, a crowbar, a Batarang, and two pieces of hundred-dollar bills.

If you have kids at home who are just developing their liking for Batman, then this is the set you might want to go for.

Things to Consider While Purchasing a Lego Batman Sets:

If you are aiming at grabbing the best Lego Batman set, then you might want to consider the following factors before making the purchase:

Take a look at the total number of pieces of the Lego box. If it has too many bricks, then the Lego set will demand a chunk of your time along with an intermediate logo constructing skill. But if you are a beginner, or purchasing the Lego set for a small kid, then it is best to settle for Lego Batman sets that have fewer pieces.

Batman set would look incomplete without the inclusion of minifigs. You are most likely to get a Batman figurine in all the sets. So, look for your choice of supervillain while purchasing a Lego Batman set.

Joker, Mr. Freeze, Harley Quinn, Poison Ivy, Penguin, Riddler, Ghul, and Bane are some of the most popular villains among Brickers across the globe.

Look for a Lego Batman set that consists of several accessories like Batarang, shooters, and other elements. These give versatility to your Lego set and make the playtime more enriching.

Do set out a budget before you start scrolling through the Lego Batman collection. We recommend you stick to your budget while making the final decision. This will help you to get the set that is worth the money you have spent and likely to give you a more rewarding experience than one with an exorbitant price tag.

5. Size of the Finished Model:

Kids have their own preferences when it comes to toys. Some kids like playing with smaller toys that are easier to handle, while others would prefer a bigger one. Before you make a choice, know what type of Lego toys your child (or anyone who will construct it) like and purchase accordingly.

If you are decided about which Lego Batman set you are going to purchase, tell us too. We love hearing from you.

But if you are still treading the grey zone, here are a few of our recommendations to help you make up your mind:

We think that the best Lego Batman set is THE LEGO Batcave Break-in  It is a toy of sizable stature that brings some of the most thrilling Batman components together. Our second recommendation to you would be the LEGO The Batmobile. It is the second-best Lego Batman set for its sleekness, magnificence, and the awesome features it packs.

If you have a question on any of the products we have mentioned here on this article, just comment below stating your query. You can expect us to be back shortly with an answer.