When we think ‘Lego,’ we often think ‘Pricey’ or ‘costly.’ And if you are one of the persons to think these words side by side, then you aren’t entirely wrong. Some of the Lego sets are exorbitantly priced. But if you look a little further, you can get a decent Lego set in as less as fifteen or twenty dollars.

If you are on a lookout for one of the best Legos sets for your child that develops your kids’ skills and entertains him or her at the same time, then welcome! You are exactly on the right page. In this article, we are about to review the ten best cheap Lego sets of all time. These sets are of decent quality but will certainly shield you from the after-purchase burn.

But before you jump into choosing the best Lego sets, we would rather have you take a look at the two most crucial factors that you must always keep in mind before purchasing:

If you are all set to choose the best Lego sets that come at a reasonable price, then read our reviews. If you want to cast your glance at a few more factors that you might like to consider before making the final purchase, then read our Buying Guide. 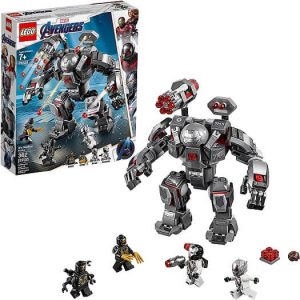 The War Machine Buster is a 362-piece set that is ideal for millions of people who love Avengers. It is a terrific cheap Lego set that engages children in Imaginative play to battle the outriders.

The grey body, along with the Red detailing of the original War Machine in movies, has been aptly conceptualized and designed by Lego in this toy.

It has an openable cockpit to accommodate one of the mini-figures that come along with the set. This War Machine features two gripping hands, two stud-shooting cannons that are detachable, and a rapid-shooter, to take the playability to another level. It is because of all these features it is perhaps the best cheap Lego set on our list.

This Lego set is the best for kids who love sports cars. It will most likely appeal to the taste of little boys. The McLaren Senna is one of the coolest sports cars ever made with the sleekest features. It has a black and grey body with little orange pieces. This is an easy-to-assemble Lego set that has 219 pieces.

The reason we are listing as the second-best cheap Lego set is that it is pretty reasonably priced and offers a great building experience to all Lego fans. There is also a minifigure of a sports racer included in the set that you can put inside the car after removing the windshield. The wheel rims are interchangeable. You also get McLaren and Senna stickers for a more authentic look. 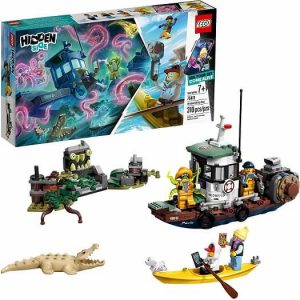 Explore the hidden domain of imaginative play with this set of the Lego hidden collection. It is a wrecked shrimp boat that comes in a 310 Lego set. You can easily take apart the boat and give it a wrecked aura.

This is the third-best cheap Lego set according to us because it comes to life when you scan the toy with the phone. Hence, you can play with this nautical toy in an augmented reality game as well. Scan for ghosts and another fun element to enjoy hours of Lego fun. 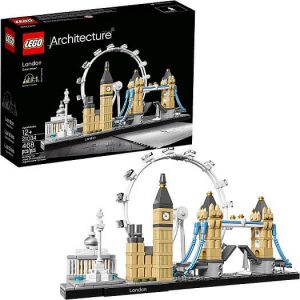 In this set, Lego brings you a beautiful assortment of mini architectural replicas of Britain. The London Skyline Lego set contains 468 pieces and is recommended for children who are twelve years and above.

It is the fourth-best cheap Lego set because of the beauty it exudes once built. It is designed for display. There are five pieces of mini replicas of British architectures- Nelson’s Column, Big Ben, Tower Bridge, London Eye, and the National Gallery.

There is also a collectible booklet that comes along with the set. It expands your kid’s knowledge by letting them know several interesting facts about all the designs. 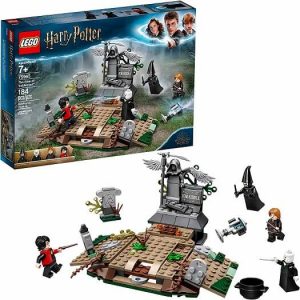 The Rise of Voldemort set brings to life the incredible scene in the Hangleton Graveyard, where Harry fought Voldemort in the Movie Harry Potter and the Goblet of Fire.

This Lego set includes various little detail that was in the scene. There is a cauldron, graveyard, and four minifigs— Harry with a Wand, Voldemort with a wand, Peter Pettigrew, and a Death Eater.

It is the fifth-best cheap Lego set because of its heightened playability quotient. After constructing, when you pull a brick lever, the minifig of Voldemort rises from the compartment hidden underneath.

If your child already has several Lego sets of Harry Potter theme, purchasing this one recreating the most iconic scene from the Goblet of Fire is a terrific idea. It also makes an excellent first purchase from the series because of various minifigs and accessories in the set. 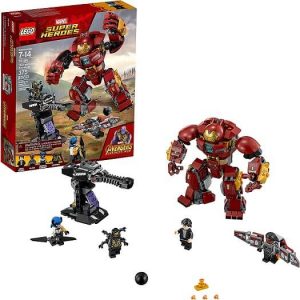 The Lego Avenger collection never ceases to surprise us with its variety and designs. The Hulkbuster set contains 375 pieces of Lego bricks that build up the posable and incredibly authentic-looking Hulkbuster in a miniature form. It features an openable cockpit and bashing arm. There are also four minifigures that come with this set are Bruce Banner, Proxima Midnight, Falcon, and an Outrider figure.

Your child can have immense fun putting it all together and afterward playing with the set and the minifigs. The cheap Lego set is neither too large, not too little. It gives the kids a perfect balance between fun and other activities and comes at a very reasonable price, which is why it is the sixth-best cheap Lego sets of all time. 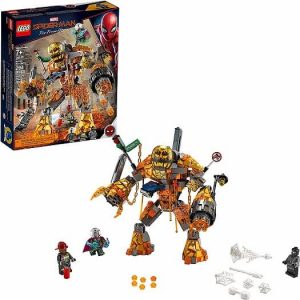 Kids who loved the Movie Spider-Man Far from Home will appreciate this figure of the Molten man created by Lego. It is a budget-friendly set that you can gift to kids who are seven years and above.

The flaming supervillain is the favorite of many kids who are awestruck by his strength. The molten man battle set contains 294 pieces and four Minifigures. This set includes three Minifigures—Spider-Man, Mysterio, and Fire Fighter.

It is the seventh-best cheap Lego set because of the Molten Man figure is laden with various little detailing like buildable melting features (including a half molten car). It also features a flexible claw, and a rapid shooter can shoot six studs consecutively. 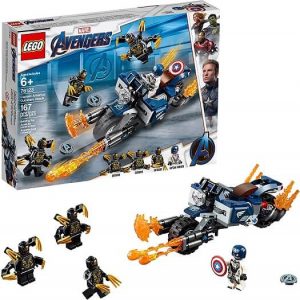 The Captain America Bike is a wonderful creation by Lego, consisting of only 167 pieces. It comes across as a mini-piece of magnificence. The Bike features a mini cockpit and shield shooters. The set also includes four minifigures— a captain America Minifig and three outriders.

It is an awesome Lego set that is perhaps more suitable for younger children as it is rather simple to put together. Your child can put this Avenges Captain America set together with other Lego Avengers toys to have better constructing fun and imaginative play. 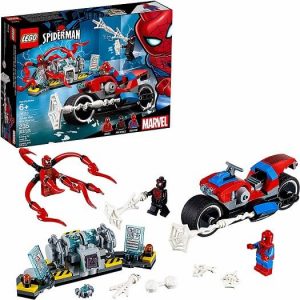 This is an action-packed Lego set where your kid can build the Spider-Man Bike on a mission to stop Carnage from blowing up the Power Generator. It features an array of accessories and parts along with three Minifigures and is the ninth-best cheap Lego set on our list.

You can put together the Power Generator and Spider Man’s Bike using this set. The power generator has an exploding function, and the Bike has a shooting feature that takes this Lego set’s playability higher by several notches. 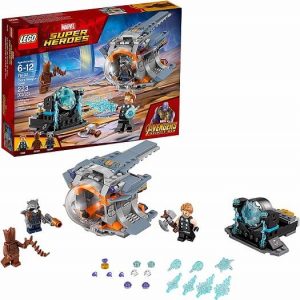 Join Thor, Groot, and Rocket Racoon in a thrilling mission to Nidavellir on their Escape Pod. This escape pod has two stud shooters for combating super villains and a detachable roof for fitting the minifigs.

It is one of the most reasonably priced Lego sets and stands at the last position on this list of the ten best cheap Lego sets of all time.

In this set, you also get a space station that has a cosmic power source to make it more attractive to Avengers fans. So, if your kiddo loves movies from the MCU, this will make a terrific gift for him or her as they can start building their own Marvel Universe.

Things To Consider While Purchasing The Best Cheap Lego Set

If you want to buy an awesome Lego set that offers good features, is inexpensive and has developmental values, then here are the factors that you must consider:

To get what is most suitable for your child, you must first look at the age recommendation that is given on the box. However, if you are planning to buy any of the Lego sets listed above, then look under the ‘Features’ of each product, we have mentioned the suitable age for you.

All the Lego sets we have listed above are pretty reasonable with respect to other Lego sets in the market. However, there are price variations in these ten as well. To know which is the best product that will go lightest on your pockets, check out the product’s price. Also, beware of knock-offs while searching for a cheap Lego product.

Apart from the minifigs, bricks, and instructions, some of the Lego sets contain various accessories that make playing with these sets a super fun activity. If you are particularly looking for sets for children between 6 years to 14 years, then look for these accessories, as it would keep them interested for long.

4. The number of Lego Bricks:

Always have a look at the number of Lego bricks that are included in a set. It is this factor that decides the time your kid will require to invest in order to build a Lego model. The more the number of parts, the more time a set will require and vice versa.

Some of the Lego sets have a high degree of playability, which makes them the best cheap Lego sets in the range. These toys often include movable parts, gimmicks, an array of Minifigures, and other accessories. Look for this factor while purchasing a product.

If your child is a Lego fan, then the chances are good that he or she is already collecting Minifigures. So, we advise you to considerthe number and variety of minifigures a Lego set has to offer. In case you have a child, who isn’t very much interested in minifigs (which rarely happens), you might like considering any of the above-mentioned products.

Constructing models out of Lego bricks is fun. It expands the creative horizon of a child and develops his or her other skills at the same time.

We hope you have found the best cheap Lego set by now. However, if you are still searching, then you can consider buying the LEGO Marvel Avengers War Machine Buster 76124. It is an accurate replica and gives you an opportunity to snag four awesome Minifigures.

The LEGO Speed Champions McLaren Senna 75892 is a cool cheap Lego set as well for a child who is passionate about sports cars.

Let us know what you think about this list of the best cheap Lego sets by writing to us. Also, if you have a question regarding any of the products we have reviewed, write a comment and give us an opportunity to solve your query.