Beyblades is one of the most loved games of all time. And if you are a blader yourself, or a parent who wants to make their child happy, you must be in a search for the best Beyblade products. Well, you have reached the right destination.

It might seem a little confusing at first. Just focus on the two factors we are listing down, and you will be sorted.

Now, are you sure of which type of Beyblade product you want for yourself?

If yes, take a look at the ten best Beyblades. We have tested many products and read innumerable reviews before coming up with this list of top 10.

However, if you are still not certain, please scroll down to the Buying Guide section. We have discussed several factors that you must consider to get the best deal. It will most certainly help you to make up your mind. 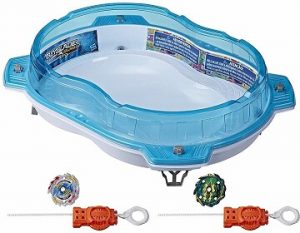 If you are in a quest for the best Beyblade battle set, then this hypersphere Vertical drop stadium and the combo of two Beyblades and launchers will suit your requirements.

The cool blue stadium has a base, a well-defined brink, and concave protective walls. It is a well-designed battle arena that is spacious and lets your Beyblade tops to exhibit their full potential.

The vertical drop design of the stadium helps the Beyblades to pick up speed and attack opponents from the most unexpected angles. However, the stadium does not have any penalty pockets.

The two Beyblades included in this set are the attack-type Ace Dragon D5 and the defense type Bushin Ashindra A5. The launchers that come with this pack are versatile—however, both the beys spin in the right direction.

If you have this set of Beyblades in your hand, you will be the ultimate champion of every battle. This set contains four iconic Beys, which are sturdy and loved by your fellow-Beybladers. It is one of the best Beyblade combos.

As it comes in a well-curated Beyblade burst pack, this one makes a perfect gift option. All the children are surely going to love this pack.

The four beys you gey in this pack are:

The lack of launchers is the only cause we are placing this set in the second position. 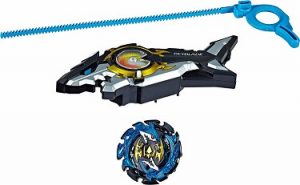 Looking out for the best Beyblade burst and launcher combo? This set right here might fit the bill. The riptide is a sturdy Beyblade that spins in the right direction. It is a defense type top that can take many major hits and still keep rotating to your surprise.

The riptide has the cool looking Forneus F4 as the energy layer, its forge disc is the D44, and as the driver, this bey has TD11-S.

As it is a product from Beyblade’s Slingshock series, it has a dual-driver mode. The Riptide can ride the stadium rails in the slingshock mode and can act like any other defense type bey in the battle ring mode.

One of the major reasons we are placing it among the three best Beyblade sets is because of the shark launcher it comes with. It is an LR launcher with a power gauge that can measure your performance every time you say 1,2,3 Let it Rip! 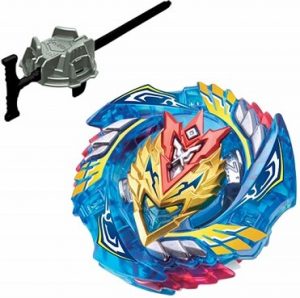 The Cho-Z Valkyrie is yet another product from the Beyblade’s burst system that we are reviewing. The valkyrie is a right spinning edgy attacker with a cool blue top with a jagged perimeter.

Although it falls under the attack type, it is also one of the best Beyblade in the defense category as well. If you launch this Beyblade hard, you can awaken the rubber burst toppers. These can burst the rival beys easily and gives you an upper hand in battles.

The Zenith forge disc has an attack stat of 5. Both the zenith forge disc and the evolution tip are reasonably heavy, which enables this bey to take quite a few hits without getting damaged.

It is a starter set that comes with a mini launcher. The sole reason for us to place it as the fourth-best Beyblade product is that the launcher it comes with isn’t the best. Besides, it will probably not be able to awaken the burst stoppers, which is a specialty of these Beyblades. 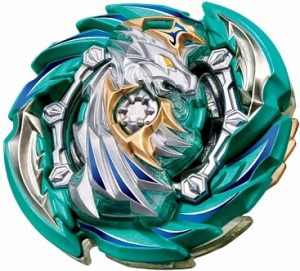 Does your Beyblade strategy consist of being the last survivor in the stadium? If so, then you need the best Beyblade of the stamina type in your collection.

The heaven Pegasus is a stamina type Bey top that is from the Gatinko chip system. Obviously, it has several layers that keep it spinning for a long time while other tops exhaust themselves in the process.

The heaven Pegasus can perform an array of special moves like Lock Reverse, Heaven Thunder, and Feather Storm. The wing of this bey flips open during spinning because of centrifugal force, which strengthens its attacking capabilities. 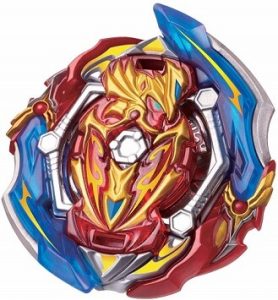 If you want the best Beyblade on all fronts, the union Achilles will perhaps suit your taste. It will work excellently against the attack, defense, and stamina type beys.

As a Beyblade belonging to the Gatinko layer system, the Union Achilles has several layers. Let’s have a look:

It is one of the best Beyblades of all time. This top features several special moves to defend, attack, and still be able to keep the bey stable. These moves are- Union buster, union dive, union Flux, Union Shoot, and Union Shield.

However, you might feel that the union Achilles is a bit costly, which is why we have placed it in the sixth position. But it is a buy-worthy Beyblade product and is worth it every penny. 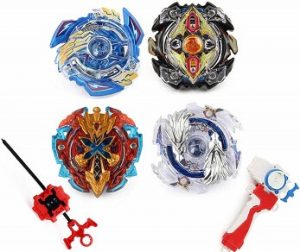 It is a value for a money set that consists of four beys. These tops have metal discs and can engage in head-on conflict in the Beyblade stadiums.

These tops are sturdy and well made. Each of these beys comes in three separate parts. So, it requires putting together. Apart from the tops, you will get two good quality launchers. Also, a winder and stickers are included in the pack.

It is our seventh best Beyblade product recommendation. The reason is, this set is not really recommended for kids below thirteen years. The pack comes in lovely packaging and makes a good birthday gift. You can as well buy it for yourself if you love Beyblades, both the game and the anime. 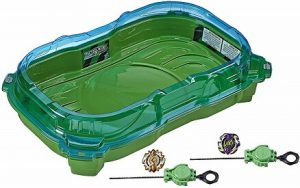 Love multi-player Beyblade battles? Then this massive Slingshock stadium is just for you. It is a cool green colored combat arena with four rails indented on the terrain of the stadium. Four to six Beyblades can easily spin around in this stadium at a time.

It is a complete value for money pack that includes the Beystadium, two Beyblades and launchers. The tops that are in the pack are the attack type Artemis A4 and the defense type Astro A4. The former spins in the right direction, and the latter is a left spinning top.

‘Value for money’ and ‘inexpensive’ are two different things. It is indeed one of the best Beyblade starter set, that is completely value for money. But it is certainly not inexpensive as it costs around fifty dollars. It is because of the cost of the set; it is the eighth-best Beyblade product on our list.

If you want to get a discount on this combo, try buying it online. Sites like Amazon offer good discounts on Beyblade products. 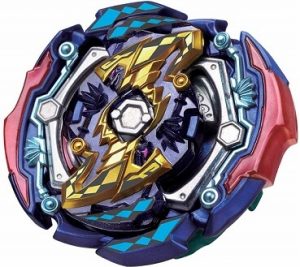 The judgment joker released last year and is immensely popular in 2020. Both the name and the features of the Judgement Joker is pretty cool. At present, it is one of the best balance type Beyblades.

You can strategize the tip of the driver to your own benefit. However, if you launch this bey really hard, it can bump against the walls and lose momentum.

It is a product from the Gatinko chip layer system. The parts this Beyblade includes are:

No wonder it is one of the best Beyblades and the most popular. However, we judged that the Judgment Joker has its flaws, for which it ranks in the second last position. 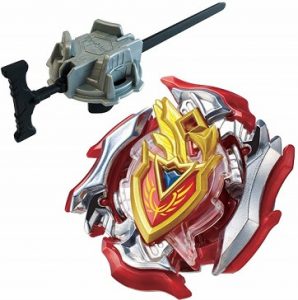 The Zet Achilles is a balance type Beyblade with considerable attacking power. As it is a bey from the Cho-Z line, this has three parts. The top energy layer has a good concentration of metal on the wings that help the bey to intensify its attack. The 11 forge disc has a moderate weight, which betters the stability of this top. It has an Xtend driver. As the name suggests, you can actually extend the height of the driver to suit your battle needs.

The Zet Achilles is not the best Beyblade out there. But it is certainly good. So, if you are searching for the perfect top to start your Beyblade journey with, the balance type Zet Achilles will be a nice pick.

Things to Consider Before Purchasing the Best Beyblade Product:

If you are wondering what factors must you consider to buy the best Beyblade product for yourself or your child, then read on.

1. Type of the Beyblade

There are four distinct types of beys that you will come across. Every player needs a couple of all of the types. However, if you are here to buy just one or a few products, then choose what you need most at this moment.

The four types of Beyblades are:

The price of a product is a very important point of consideration. Especially when you are buying toys. Go through the contents of the pack carefully and make sure that the Beyblade product you are buying is value for money.

Beyblades can be a thorough source of entertainment. But if you buy the wrong combo or the wrong type, it can result in disappointment. Hence, always consider this factor if you want to purchase the best Beyblade product that puts a smile on your face.

It is not only the look of a Bey but also the special characteristic features that set it apart. In the Beyblade world, the gimmick pool has a lot to offer. Some beys have special unlockable features, the drivers of some of the Beyblades have several modes, while others have movable parts. To get the best Beyblade that is perfect for your gameplay strategy, always consider the gimmick a Beyblade can perform before purchasing it.

4. Weight of the Beyblade

If you want a defensive player to join your team, choose a Beyblade that is heavier on the weight scale. Otherwise, a bey with moderate weight is better. However, we advise you to stay away from Beyblades that are very lightweight. They often lack quality and get damaged easily.

If you haven’t been able to decide yet, please peruse our buying guide thoroughly. Although, we can as well suggest a few of the best Beyblade products from this list.

We think the Beyblade Hypersphere Vertical Drop Battle Set is the best Beyblade product there is. It comes in a combo pack of stadium, Beyblades, and launchers at a very reasonable price. If you are looking just for tops, then you can choose the Beyblade Burst Evolution Elite Warrior 4-Pack. It yet another cost-effective pack that consists of a variety of good quality tops.

If you have any queries regarding this article, please write to us. We shall answer you at the soonest.