Beyblade burst are loved worldwide. The specialty of Beyblade burst toys is, you can take your gameplay to another level with these. In the burst battles, you can score extra points if you can burst-open your opponent’s Bey with yours.

If you are looking for the best top from the Beyblade burst series, then it is likely that either you are a child who wants the best of the best, or you are a parent trying to search for a Bey your child would love. Either way, this article is going to help you find the best Beyblade burst.

As the Beyblade burst tops have a slightly complex mechanism and come in an innumerable variety, you are likely to feel a bit confused. It will be somewhat confusing if you are a new blader and wholly perplexing if you are a parent who knows nothing about this game!

Always keep in mind the below-mentioned points while purchasing a top to get the best Beyblade burst toy:

If you want to keep looking for more tips to buy the best Beyblade burst, then read our Buying Guide, which is where we have discussed a few other factors that are crucial while purchasing Beyblade burst tops. But if you are an experienced blader already, then here are the ten best Beyblade burst in 2020 that we have listed after much research and thorough testing. 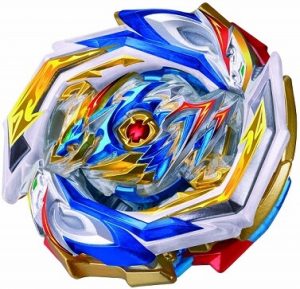 Want to be the invincible champion of Beyblade battles and tournaments? Then the Imperial Dragon IG is a must in your collection.

We think it to be one of the best Beyblade burst as it is the one of the heaviest Bey, features a battery-operated driver (attack type), and goes both ways. With this Bey, you will not have to shift a gear right or left; it has a mind of its own. The Imperial Dragon Ig will perform splendidly in the stadium.

The electric driver gives it tons of stamina to keep it spinning for long. It also features a cool green light atop, that will make your Beyblade burst stand out against your competitors. 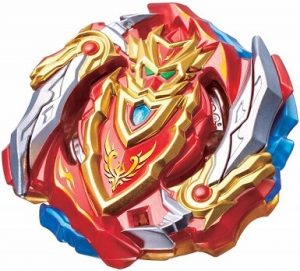 Anyone who loves Beys recognizes Achilles to be one of the best tops that were ever created. Here is the upgraded version of your favorite Beyblade burst with better attacking power, more stamina, and a brand new LR launcher with an extra-long string.

The Cho-Z Achilles is a balance type Bey that can stand even against the toughest Regalia genesis. It has a red body, and you can launch it in any direction with the LR launcher it comes with.

We are placing it fourth because the disc in this Bey is 00. It is the heaviest disc there is. So, even if it is great for defending, it will not spin the fastest or let your Beyblade to be very aggressive in battles. 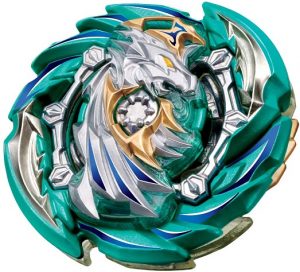 The venom Diabolos is one of the strongest Beyblade bursts you will ever find. It is a unique type of Beyblade toy and is pretty versatile.

It has a mini blade that can/might launch on the stadium by detaching itself from the main body of the Venom Diabolos is hit hard by rival’s top. If you choose this as your preferred Bey in a battle, this top gives you a double chance to win. Cool, right?

Furthermore, it comes with two bases— the white eraser base, which is left spinning, and the dark venom base, which spins in a clockwise direction. There is also a launcher with an extra-long ripcord that helps you launch the Beys to your advantage. 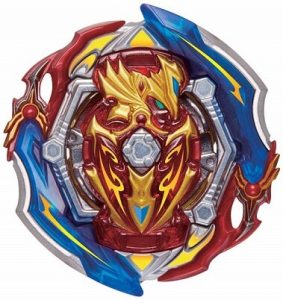 You will absolutely love the union Achilles Beyblade burst if you are a fan of customizability. This Bey has two modes for different types of Beyblade battle strategies. With this one in your collection, you can be the king/queen of versatile Beyblade battling strategies.

There is a cool union sword base. When you keep the base on, the Bey is in the attack mode/power mode. This should be your go-to mode if you are targetting a burst finish, as it gives the top a great deal of attacking abilities. If you remove the union sword base, the top becomes lighter, and this is what the manufacturers call the speed mode. This is better if you are aiming for a survivor finish.

It is one of the best Beyblade burst of all time. Although there are way more powerful Beys than this, we can put our finger to only two lacunas. First, the union Achilles does not come with a launcher. Second, it rotates only in the right direction. Which is different from most of the products listed above, which rotates both ways. 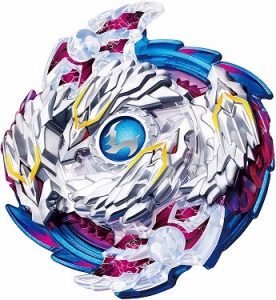 All the lovers of Beyblade burst who do not like complicated assembling will certainly hail the Nightmare Longinus in their collection. This Bey consists of only two parts— the energy layer and the driver. Yes, this one does NOT have a forged disc!

It is a pretty wide Bey with four dragon head wings to maximize its attack. However, we think it to be the sixth-best Beyblade burst because it has compatibility issues. The driver and the energy layer aren’t compatible with other products of the burst range. Also, the launcher that comes with this package isn’t the best.

However, if you are looking for one of the best attack type Beyblade bursts, then you can’t walk past the Nightmare Longinus! 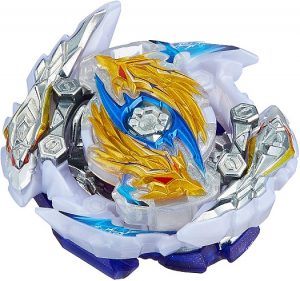 The Beyblade burst B-144 GT triple booster is a newly launched set that comes with three Beyblades. This set contains the Slash Dragon, Lord Spriggan, and the Dead Bahamut.

It is a cost-effective package that lets you add three amazing Beyblade burst tops to your collection. The reason for us to rank this as the best Beyblade burst is because one of the three drivers in this pack is the Octa driver. This driver is a specialty that Hasbro sold separately up until now. Even the Lord Spriggan is a pretty rare and awesome type of Bey that you get along with this pack.

With this one in your grip, you will not have to fish for left or right spinning Beys. This set has it all. The Slash Dragon spins right, the Dead Bahamut is a left spinning Beyblade, and the Lord Spriggan can spin both ways (you have to shift gears though).

So, if you want your Beyblade to be the last-one-spinning in the Bey stadium, then this pack is a must.

NOTE: Most of the Hasbro and Takara LR launchers will work with these blades. 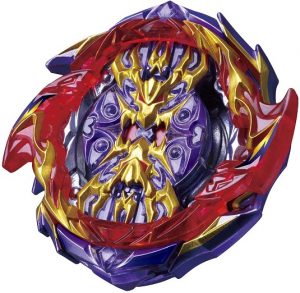 In the second position, we have another value for money Beyblade set waiting for you to grab it. In the GT B-157 set, you get four Beyblades.

While we have seen the first two Beys in several other sets, the latter two are relatively new additions by Takara Tommy. The Prime Apocalypse and Regalia genesis feature the ‘Infinite lock system,’ which means it will be super tough for your opponent to burst your Beys to score points.

The hybrid driver is battery powered, so these are pretty strong and will pose a mighty challenge to your rival in the Beystadium. However, changing batteries of the hybrid driver can be a bit tricky, although an instruction manual is given in the package. 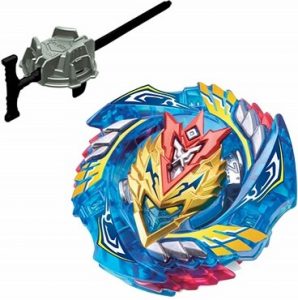 The Cho-z Valkyrie is an upgrade on the fearsome Winning Valkyrie. It is an attack-type Beyblade burst that you can’t ignore if you want to be the victor in Beyblade burst battles. It is perhaps one of the most unburstable Beys you have ever seen.

This top has the Cho-z Valkyrie layer, the Zenith disc, and the evolution driver. If you launch this top real hard, then you rip open the ‘invincible mode.’ In this mode, the orange rubber wings pop out, and the Bey becomes super tough to burst. 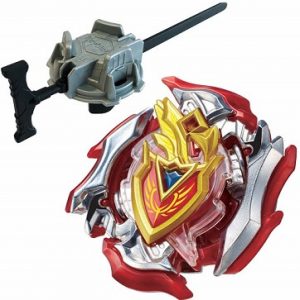 With the Zet Achilles Beyblade burst top, you get the advantage of attack, defense, and stamina as this Bey falls under the balance type. If you are a first-time blader looking to purchase your first starter pack, this is a nice point to begin your journey. But you will have to be a minimum of 13 years old as per the age requirement given by the manufacturer.

The energy layer in red is kind of cool. This Bey does not come with a lot of stickers, which might upset some kids out there. You get the forged disc 11 and extend driver. As the name of the driver suggests, you can actually extend and collapse the height of it as per your battle requirements. 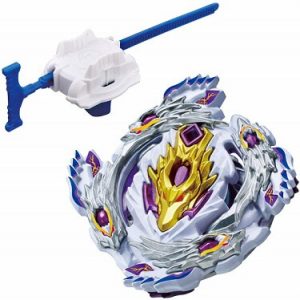 Deviating far from its name, the Bloody Longinus is white in color. Although it is a pretty sleek Beyblade burst design, somehow it does not look as formidable as the Regalia Genesis, the Imperial Dragon Ig, or most other Beys on this list.

It is an attack-type Beyblade burst with 13 forge disk and the Jl driver. It lacks special gimmicks. But on the positive side, this Bey has four dragon heads that can impart maximum damage to its opponent if you launch it right.

It is neither the best Beyblade burst, not the worst. But it is certainly one of the good ones that you will not regret buying.

Things to Consider While Buying the Best Beyblade Burst Toy:

If you are looking for the best Bey in 2020, then you have reached the right place. In this section, we will discuss the factors that you need to keep in mind while choosing a Bey toy. Let us have a look:

You can select from four different Beyblade burst type:

There are several games you can play with a Beyblade. If you are targetting to win as a survivor, then you should choose the defender or the stamina type Beyblade burst. If you want a ring-out victory in a particular game, then the attacker/striker Beyblade burst will work wonder in your favor. And if you aim to score two or more points by bursting open opponent’s top, then a Beyblade that is semi unburstable, preferably with an infinite locker system, is the best thing to settle for.

In most of these games, customizing your Beyblade burst is permissible. However, in the case of a Beyblade burst Tournament, you will have to use a top as it is.

Beyblades are of various types, and if you have made up your mind on which Beyblade burst toy is the best for you, then comment below to let us know your pick.

If you are wondering about which one is our favorite, then here are our top picks:

Takara Tomy Beyblade Burst B-154 This is the best Beyblade burst because it comes in a pack of three. This set also has the newly launched Lord Spriggan Bey and the super rare Octa driver. All this and so much more comes in this reasonably priced pack of three Beys. What more can you ask for?!

Takara Tomy Beyblade Burst GT B-129– This set comes in a pack of four. This pack contains two of the latest launches—the Prime apocalypse and the Regalia Genesis. These two latest Beyblades also feature the infinite lock system, which makes them nearly unburstable in battles.

Did you find this article helpful? Let us know your views by writing to us. For queries on any of the Beyblade burst toys we have listed above, simply comment below to let us know. We shall reply at the earliest.