A Beyblade Combo always looks like a super value deal. And no matter how many launchers and Beystadiums you have, resisting your temptation to buy a new one can seem tough.

You might want to lay your hands on every Beyblade combo that Hasbro or Takara Tomy launches. At this point, you need to sit down and think about the Beyblade products that you might need the most. Don’t worry. It’s not tough.

Here are two of the most important things you need to keep in mind in order to choose the best Beyblade burst combo:

Contents in the Pack: If you are searching for a combo for kids who are new to Beyblade, then a starter pack that contains a stadium, launcher, and tops will be the best. But if you already possess a few good launchers and stadiums, a value pack that includes several tops of a varied category will be the best Beyblade combo to go for.

Types of Beyblade: No matter what combo you buy, make sure it has the type of bey that will benefit your gameplay and suits your strategy. Mostly players buy attack type Beyblades, but we suggest you not underestimate the defense and the stamina types. These can be of immense help in survival and multiplayer games.

If you still need help on how to buy the best Beyblade burst combo, please have a look at the Buying Guide section. We delineated a few more crucial factors that you might want to consider before shelling out your hard-earned money.

And if you are all set, take a look at the ten best Beyblade combos. We have put in our hard work and come up with these after weeks of research. 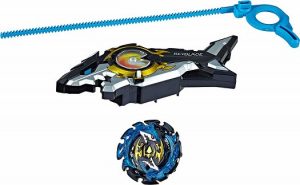 This pack of the Riptide blade, along with the shark launcher, is a superb combo because of its quality, looks, and value for money. The riptide is a right-spinning defense type Beyblade that can take a lot of hits and still keep spinning. It will work spectacularly against lightweight attack type beys. These tops will burst open once it comes in contact with the formidable Riptide.

What makes this Beyblade burst combo the best one, is the inclusion of the LR shark launcher. The launcher features a power gauge. This meter can measure the power at which you are launching your top. The higher the meter reads, the better your Beyblade will spin on the stadium.

This launcher can spin tops in both ways. So, if you are out of a launcher and need one right now, you get it with this pack.

In this pack, you get four iconic Beyblades that comes under thirty dollars. It is a superb combo of beys to add to your collection. And if you are searching for an excellent gift option for an upcoming birthday party, you have yourself a deal in front of you.

It is one of the best Beyblade burst combos because of both the variety it includes and quality. This set incorporates three of the four types of Beyblades that are available. The Draciel S is a defense type bey, the Dranzer S and the Xcalius X2 are from the balance category, and the Genesis Vltreyk V3 is an attack-type top.

We have ranked it as the second-best combo because we feel that that the inclusion of a launcher would have been better. Also, all the beys in this set spin towards the right, a left spinning top would have added more variety. 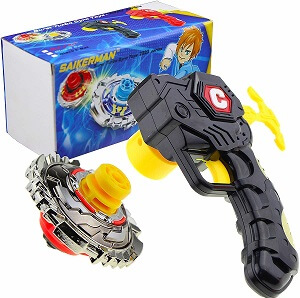 Want the most cost-effective option starter pack? This metal burst combo is perhaps the perfect thing for you.

The Top is sturdy and requires putting together. Like most of the Beyblade metal fusion burst, it has a face bolt, three fusion wheels, spin track, and performance tip. Once you have assembled the Top, take the accelerate launcher and rip it!

As it primarily a metal burst top, the plastic beys will hardly stand a chance in front of it. Another positive factor that makes it the third-best Beyblade burst combo on this list is the inclusion of the top-quality rope pulling launcher that is capable of spinning your bey at lightning speed.

This top can take a lot of hits and still exude a good amount of stamina at the same time. So, if you want to be the last man standing in the Beyblade stadium, it is a super value pack!

If you have a love for surprises, then you will surely adore purchasing the B-151 Random Booster Vol.17. It is a Takara Tomi product, in which they send you one random Beyblade burst top from a list of eight beys. However, if you are lucky, you stand a chance to win another prize Beyblade.

If you purchase this product, you are likely to get anyone among the following eight products:

If you are a parent, it will be a wonderful purchase to make with your child. The element of surprise and the value for the money pack make it one of the best Beyblade burst combos. 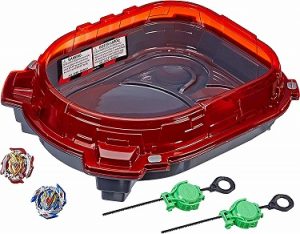 Ride the rails and let your beys pick up the best momentum before they come back to burst your opponent.

The set consists of a Beyblade stadium of seventeen inches diameter, the attack type bey–Wonder Valtryek V4, and the king of balance­–Z Achilles A4. Additionally, it also comes with two pieces of right/left-spin launchers. You get all these under thirty-five dollars!

This one is an especially great combo if you are a fan of the Beyblade Slingshock product line. The stadium is in a shade of grey and striking red. It can easily accommodate four to six spinning tops at a time.

Although it is one of the best Beyblade burst combos, we are placing it in the fifth rank. It is so because this particular pack is pricier than all the products we have reviewed so far. Also, the beys tend to get trapped sometimes in the shallow round shapes that are indented in the terrain of the stadium. 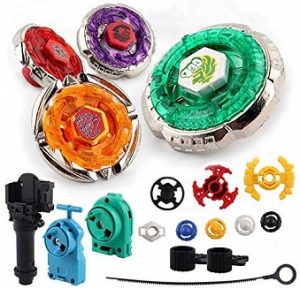 If you are a fan of the metal fusion tops, then you can’t say no to this burst combo. This pack has an array to offer, both new and experienced blader. The set contains four metal burst tops, two launchers, and instructions. The game also includes stickers that you can use to add some cool graffiti on your Beyblade burst tops.

These are pretty sturdy beys to use against your opponents; they aren’t flimsy and unlikely to burst in battles. Also, if you are searching for the best birthday gift, this pack makes a great option too. 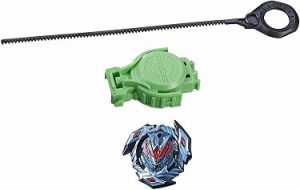 This simple and solid Beyblade burst combo consists of the iconic attack type top, Valtreyk V4 from the Slingshock system, and a left/right-spin launcher.

Set the bey in the Slingshock mode, and let the Valtreyk V4 showcase its power. You can as well set its performance tip in the battle ring mode in stadiums that do not have rails. The top has high aggressive movements for knocking out other Beyblades in the battle arena.

This particular top is right spinning. However, you can use the Hasbro launcher in the pack to launch a bey in any direction. A blader with a fondness of the attack type Beyblade will surely like this Beyblade burst combo.

The reason we think this to be the seventh-best Beyblade burst combo is that the launcher is somewhat weak.

Want to do some mix and match to your Beyblade burst tops? Then get the Beyblade Brust Booster B-152 vol. 3. This pack consists of one energy layer that the seller will randomly choose from the following four layers:

And if you are lucky, you stand a chance to receive your energy layer along with another one (Knockout Odin Gen).

Say hello to the best metal master fusion combo of all times. This is a box that every child in your family will love. If you have a kid’s birthday coming up, then you can surely consider this as a gift option.

This is a great starter pack and comes with most things that a kid might require to play with Beyblades. It includes four tops, one power launcher, one regular launcher, and a winder.

The metal tops are well-designed and are durable. The packaging is colorful and will be appreciated by kids.

In this pack, you will get ONE energy layer out of the following four:

If you are a lucky buyer, then your combo will contain the Poison Hydra Zan energy disc alongside another random energy layer. So, you get two energy layers at the cost of one, which is why this is one of the best Beyblade burst combos in our view.

You must note that buying four sets does not guarantee you will have one of each kind. And it definitely does not assure the prize energy layer.

Things to Consider Before Purchasing the Best Beyblade Combo:

Here are a few things that you must consider in order to buy the best combo:

While searching for a combo, always take a good look at the Beyblade the pack contains. A Beyblade burst top has several parts that you need to put together before you can play with it. So, make sure that you are comfortable with it.

A bey from the Cho-Z layer system will have about three parts. But you will have to put together five to seven layers if you are buying one from the Gatinko layer system. Also, as we are talking about combos here, you must make sure the additional accessories of the pack has are easy to use and are of good quality.

Several players often have quality issues after buying Beyblade burst combos. This is why you should always read the user reviews of a particular product before you order it. You must do it to make sure that the build quality of the Beyblade burst combo is up to the mark, and it doesn’t break after a few uses.

But if you plan to purchase a product from the list we have made, then you are unlikely to be surprised. We have done the research for you and analyzed every product in detail. Read the pros and cons part of the Beyblade burst combo before you purchase it to avoid an unpleasant surprise.

3. The Type of Beyblade

Buy a combo only after knowing the type of Beyblade it has in the pack. There are four basic types of Beyblades. The attack type, the defender, stamina type, and the balance Beyblade.

The attack type beys are more agile and lightweight. The defender is a heavyweight Beyblade. The stamina beys spin for the longest, and the balance type is a combination of the above three.

Always choose the Beyblade burst pack that you think is value for money. Also, another thing to consider here is, never fall for quantity if it lacks quality. A combo that has both quantity and quality is the best deal to go for. If either is missing in a combo, it is best to ditch it.

If you still haven’t made up your mind, then we have a few suggestions to make:

If you liked reading this article, please let us know by commenting. And if you have a question concerning any of the products, then comment below. We shall do our best to come up with a satisfactory answer.